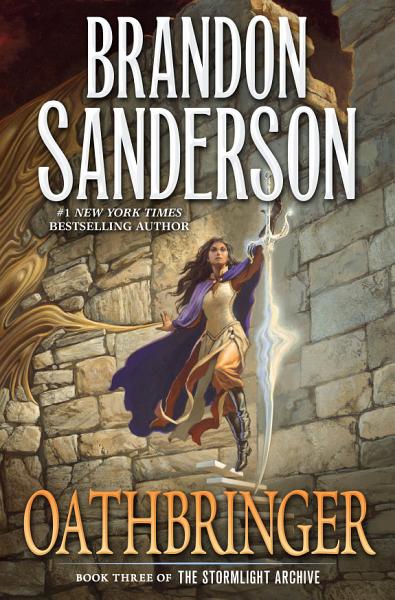 The #1 New York Times bestselling sequel to Words of Radiance, from epic fantasy author Brandon Sanderson at the top of his game.In Oathbringer, the third volume of the New York Times bestselling Stormlight Archive, humanity faces a new Desolation with the return of the Voidbringers, a foe with numbers as great as their thirst for vengeance.Dalinar Kholin’s Alethi armies won a fleeting victory at a terrible cost: The enemy Parshendi summoned the violent Everstorm, which now sweeps the world with destruction, and in its passing awakens the once peaceful and subservient parshmen to the horror of their millennia-long enslavement by humans. While on a desperate flight to warn his family of the threat, Kaladin Stormblessed must come to grips with the fact that the newly kindled anger of the parshmen may be wholly justified.Nestled in the mountains high above the storms, in the tower city of Urithiru, Shallan Davar investigates the wonders of the ancient stronghold of the Knights Radiant and unearths dark secrets lurking in its depths. And Dalinar realizes that his holy mission to unite his homeland of Alethkar was too narrow in scope. Unless all the nations of Roshar can put aside Dalinar’s blood-soaked past and stand together—and unless Dalinar himself can confront that past—even the restoration of the Knights Radiant will not prevent the end of civilization.Other Tor books by Brandon Sanderson The Cosmere The Stormlight Archive The Way of Kings Words of Radiance Edgedancer (Novella) Oathbringer The Mistborn trilogy Mistborn: The Final Empire The Well of Ascension The Hero of Ages Mistborn: The Wax and Wayne series Alloy of Law Shadows of Self Bands of Mourning Collection Arcanum Unbounded Other Cosmere novels Elantris Warbreaker The Alcatraz vs. the Evil Librarians series Alcatraz vs. the Evil Librarians The Scrivener's Bones The Knights of Crystallia The Shattered Lens The Dark Talent The Rithmatist series The Rithmatist Other books by Brandon Sanderson The Reckoners Steelheart Firefight CalamityAt the Publisher's request, this title is being sold without Digital Rights Management Software (DRM) applied.